Five Keys to a Successful Mentorship

Everyone needs a mentor. For me, that person is Carol Hague. Carol began her career in 1973 at the St. Petersburg law firm of Fowler White, and has spent the more than 45 years since climbing the corporate ladder through some of the most male-dominated offices in existence. In the years since we first met, Carol has become so much more than just a mentor. 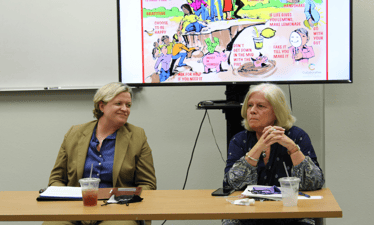 On Feb. 9, I had the pleasure of participating in a luncheon with Carol, titled “The Value of a Meaningful Mentor.” The event, hosted by the Bay Area Young Professionals group, explored the mentor-mentee relationship, went over best practices for maintaining sanity and a healthy working pace (hint: Put the iPhone down!), and featured Carol and I sharing personal stories that illustrated how mutual benefit was essential to our relationship.

Through our conversation, we landed on these five keys to a successful mentor/mentee relationship.

#1: Keep cool when breaking the ice.

No one walks up to another person and blurts out, “Hey, will you be my mentor?” At least, I hope they don’t! In my case, when I first approached Carol, we chatted a bit before I asked, “Can we get together sometime? I’d like to pick your brain.” The first time I went to meet with Carol, she brought me a magic wand and said, “I think you need this.” It was Carol’s way of telling me, “You can do it.” Our initial conversation covered my trying to juggle law school, marriage, and my concerns and ideas about my family’s business. Over time our relationship deepened, which only increased the benefit of having Carol in my life.

#2: As in all relationships, you have to find the right partner.

A mentorship done right will result in the formation of a unique bond. Like all bonds between people, it takes some time to develop its strength. Mentorships are NOT like speed dating – you can’t just match people up, and say, “You two, you’re going to be a mentor/mentee.” For the relationship to grow, there must be a personal connection between the participants, and it has to develop naturally. If you are going to approach someone in the hopes of sparking up a mentorship, you need to find the right person.

Ultimately, the best advice for attracting a mentor is to approach the relationship with a pure heart. We have all seen people that are trying to get close to a prospective mentor as a stepping-stone – a way to tap into a more established person’s connections and contacts. It feels inauthentic, and inauthenticity is the quickest way to lose support within your group. Keep your intentions pure, and success will follow.

The best mentors challenge you to think, “How do I solve this problem?” Carol likes to call it “the practice of multidimensional analysis.” Instead of looking at things through a single paradigm – i.e., my own perspective on the people, places, and things that I have experienced – I can tap Carol on the shoulder and say, “Hey, in your experience, this is the situation and what are your thoughts?” I am allowing her to speak into my life, and it is probably one of the safest relationships that I have today. Right, wrong, or indifferent, I know Carol will always pick up the phone or call me back in the very near future. And I know 150% of the time she is going to shoot me straight, even if I don’t like the answer.

#4: Your mentor’s perspective is priceless.

Carol has something of a harsh view of the smartphone. “The iPhone is your kryptonite,” she’s known to say. Carol sees the smartphone as the thing that handcuffs people 24/7. She says it’s the driving force behind the out-of-control pace of the modern workplace. She has a point, though It was initially hard for me to see it, as I took to the smartphone the same as everyone else in my generation. From Carol’s perspective – a perspective that I need desperately to hear, as I was one of the people who could not disconnect – our modern turn to hyper-connectedness is a historical aberration. 40 years ago, there were ways to keep your sanity. Now there is no escape.

Carol has pleaded with me not to allow this. She says things like, “If you’ve got your nose in your phone at work, taking care of friends and family relationships, I’m going to lose respect for you. If you are at your kid’s soccer game, and you have your nose in this phone because you’re working, I’m going to lose respect for you.” Carol’s point is that I need to protect myself. I have to set limits. It was a point that I couldn’t necessarily see for myself because my perspective – rooted as it is in the here and now -- limits my ability to put the culture change ushered in by the smartphone into historical context.

One more big thing having Carol as my mentor has taught me is to give away what I’ve received. Carol likes to say that you should have an older friend and a younger friend. You want to gain knowledge from the older friend, and maybe even impart a little knowledge of your own. But then you also need a younger friend to pass that knowledge along to. Do not be stingy with the gifts you’ve been given through mentorship. You should always be looking for ways to “pay it forward” when it comes to mentoring. What you learn today can be taught to someone else tomorrow. Or, as Carol says, “The first time I realized my life experience could benefit someone else, it just ignited a fire inside of me. And so I think one of my proudest moments is being able to say that I had a positive effect on Haley Crum.” It’s one of my proudest moments to confirm that she most certainly did.